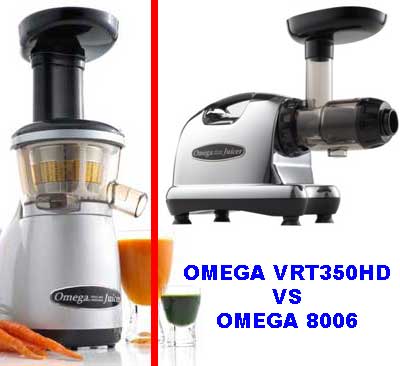 There are many juicers out in the market, more than they ever were before. This comes as a result of people embracing health and understanding that the easiest way of obtaining the most nutrients out of fruits and vegetables is through juicing. Out of the many brands out there is the Omega brand that seems to make some of the best juicers in the market- Omega VRT350HD and the Omega 8006 Juicers. A keen eye will point out what makes them both stand as giants among other juicers in the market.

The Omega VRT350HD and the Omega 8006 Juicers are both powerful juicers and easy to use for beginners although the Omega 8006 has a smaller opening hence needing food to be cut in quarters before juicing. They both have the 80 rotations per minute feature that is very important for juicers as it prevents oxidation, allows the maximum juice extraction from fruits and vegetables and sees to it that the pulp is dry before ejection. This quality in both juicers goes a long way in saving you a lot of money in terms of fruits and vegetables usage.

The low speed of 80 rotations per minute come in handy in ensuring that there isn’t foaming of the juice nor clogging during the juicing process. This leads to easy clean up of the juicer after use as well as saving you a lot of time and energy in the process. However, the Omega VRT350HD is known to clog sometimes and produce a lot of froth especially with fibrous vegetables.

The low speed juicing process of the Omega 8006 Juicers and the Omega VRT350HD does not necessarily mean that it takes longer than usual. On the contrary, it takes the same time as other juicers but sees to it that the juice maintains its natural color, maintains all its nutrients and vitamins as well as maintaining the juices’ natural taste.

With the kind of work overload that masticating juicers perform one would assume that they overheat during operation. However, the Omega 8006 juicers have 110 volts that prevents heat buildup while in use hence allowing the juicers to remain cool all through the juicing process. This quality also contributes to the long life of the juicer hence real value for your money and optimal health promotion. The Omega VRT350HD does not have this feature.

There is high juice yield with these two juicers as the fruit pulp gets ejected as you continue with the juicing process. The Omega VRT350HD juicer has two spouts and two 64 ounce collecting containers unlike the Omega 8006 juicer. One spout is for juice collection while the other is for pulp ejection.

The Omega 8006 Juicers is different from the Omega VRT350HD as it does more than just juicing. They can turn nuts into nut butters, whip up soy milk, make baby food from natural ingredients, mince herbs and garlic, grind spices and coffee and extrude pasta.

Juices from the Omega 8006 and Omega VRT350HD can be stored for up to 72 hours without juice separation or degradation that is common with some juicers. Some fruits like strawberries and ripe apples come out too pasty with the Omega VRT350HD.

There is a dual stage juicing process with these two juicers- Omega VRT350HD and the Omega 8006. The first stage involves the crushing of the fruits and vegetables. This is before they are pushed to the second stage which involves the squeezing of the food to extract the maximum juice before the pulp is ejected.

Both juicers are relatively quieter during operation than ordinary juicers. This comes as a package of the modern design.

The fact that they are both masticating juicers guarantees the saving of time, money and energy conservation. Omega VRT350HD has a modern design for high juice yield that is the vertical design that is unique from the previous centrifugal style. Juice extraction is higher with the vertical design as the food is allowed enough time to process. However, the Omega 8006 juicer has a horizontal design.

About the Author: Hey, I’m Dima and I love juicing. When I was a kid, fruits and vegetables weren’t something I was very excited about. I was much more passionate about eating meatballs with spaghetti than I was about a salad of any kind :). A few years ago I discovered juicing that not only had an effect on my daily meals, my health, and my looks but also on my entire lifestyle. And I share with you all my knowledge and tips.

Next post: Which Omega Vert Juicer is the Best? 3 Models Comparison

Previous post: How Juicing Will Make Difference to Your Life

What the * means above

Please note that the links that have a * next to them are affiliate links and those help finance the iFocusHealth.com website and provide you with more free content. If you end up purchasing through those links we will earn a small commission. There should be no difference for you whether to go through the affiliate links or directly to the same web address. The cost of the products will never negatively affect you. Actually, the opposite is the truth since in some cases we are able to negotiate a better price for those purchasing through our links.

The content on this website is never impacted by the affiliate links. All the reviews are non-bias reviews and reflect our real opinions. If there is no affiliate option to a product we recommend, it will still be included in our posts just with regular links pointing to it.

What Are You Looking For?

I am truly passionate about juicing, healthy nutrition and healthy living in general. This website is my way of sharing my knowledge and excitement with you.

It is my goal to motivate you and provide you with the necessary information to live a better and healthier life.

Please log in again. The login page will open in a new tab. After logging in you can close it and return to this page.